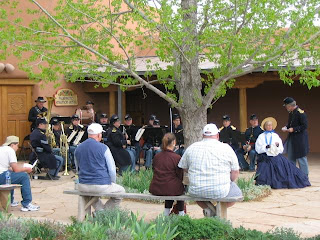 This was the first weekend event for 2009.
Civil War weekend started off the season with a bang!
When we walked through the entrance,
the band was playing! 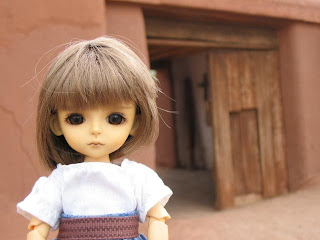 This is the entrance to the main rancho,
which is built in a square around a courtyard.
Early ranchos were built this way
to protect themselves from raiding tribes
and other attacks. 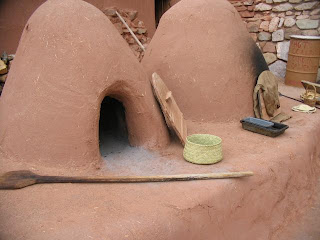 Horno ovens were right off the old kitchen.
They are still used on special event weekends.
Yum...I could smell the baking bread! 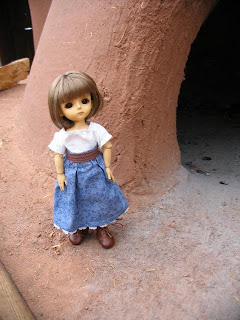 Hornos are made of adobe, just like the house! 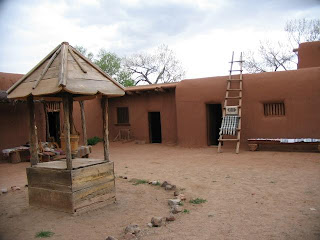 This is the inside courtyard of the main rancho.
Notice the ladder.
Ladders like this were first used by the Pueblo People.
They did not have doors on the ground floor rooms.
They used ladders to climb to the roof
and entered the ground floor rooms through the roof.
This was also a defensive tactic.
Ladders can be pulled up so your enemies can't come in! 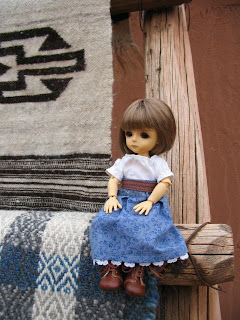 Now ladders are a staple in Southwestern decor.
I sat on woven rugs draped over the ladder. 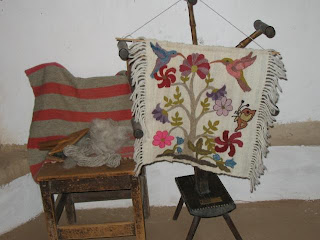 Colcha embroidery is another textile in the Southwest.
Colcha uses thick embroidery yarn.
In the American Girl books about Josefina,
Josefina's Surprise,
the colcha altar cloth had been damaged.
http://www.spanishcolonial.org/colcha.shtml 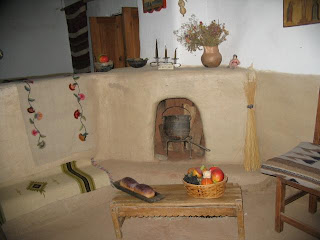 Here is a kiva fireplace in the main rancho.
There is a small doll by the flowers on the ledge.
Another colcha piece is draped over the wall.
I am starting to wonder if
this place is decked out like a real
colonial New Mexican rancho,
or if it is set up to show visitors as much as possible. 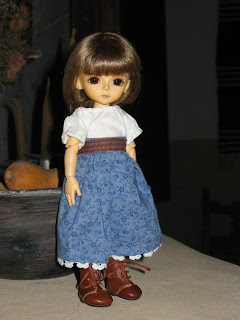 Here I am on the other side of the kiva wall,
next to the black bowl near the colcha.
This blouse and belt are from mini Josefina,
and the skirt belongs to Hope.
The shoes and underwear are mine. 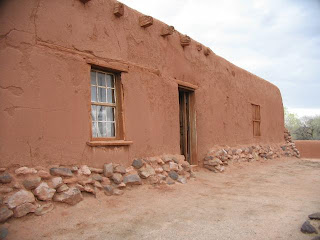 The Baca house is a later add-on.
It is from the mid 1800's.
It is a rectangle with a kitchen and a bedroom. 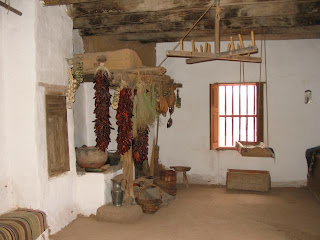 This is the Baca House kitchen. 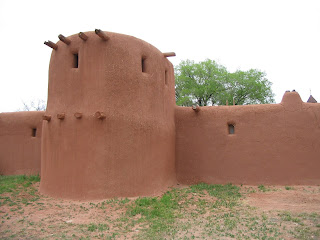 We walked through the gate of the Baca House courtyard,
around to the other side of the main rancho.
This torreon was a lookout tower.
It is one of the few surviving torreons in New Mexico.
Josefina and her sisters watch for abuelo's return
from the top floor of the torreon in Meet Josefina. 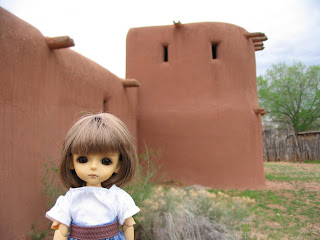 The torreon is impressive! 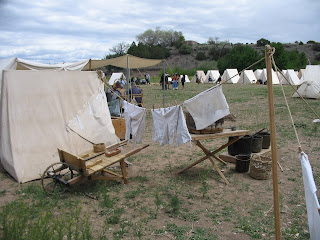 Didn't I say it was Civil War weekend?
This is the Union camp,
camping out in the burro field. 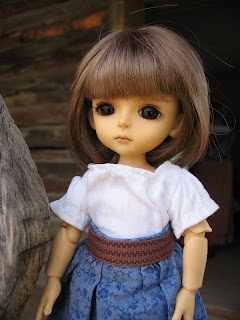 Me, on the fence on the school house porch.
I am much cuter than the school! 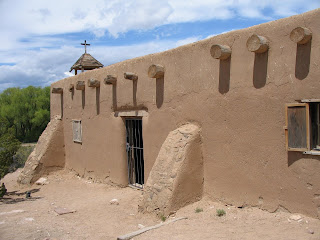 This is a church called a morada.
It is a chapel for penitentes,
which is a branch of Catholicism. 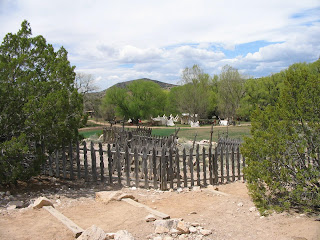 Wooden crosses up on the hill next to the morada,
view of the Confederate camp in the valley. 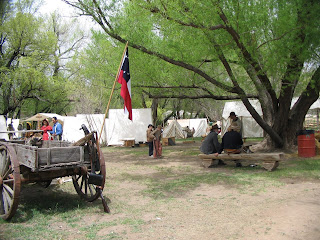 We walked down to the Confederate camp. 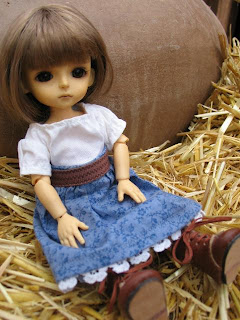 I think the best part of the day was going to the gift shop!
The burro is a logo used on the El Rancho de Las Golondrinas
merchandise.
There are burros living in the field when Union soldiers
aren't camped out there.
And the tamer burros are led around with packs
for the Spanish colonial events. 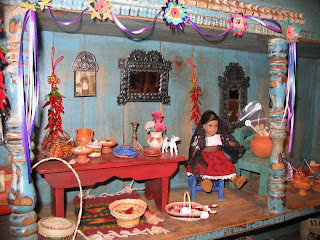 Then, a nice sales clerk who has seen us year after year,
pointed our way to the minatures.
I loved Josefina's hacienda.
It was an old Mexican cabinet.
I love it, love it, love it!
And I loved the ramilletes
decorating the space around Josefina. 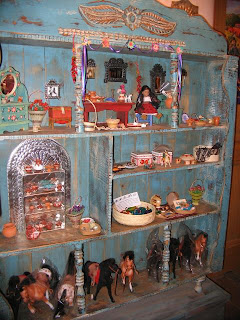 This is the full view of the cabinet. 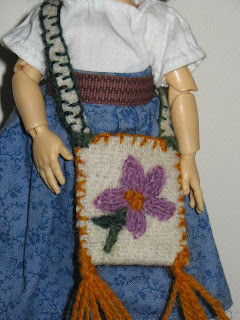 The nice lady who showed us the fine miniatures
told us how one of the manager/clerks made items for the shop.
Some of the wood furniture had been made by her.
The blue chair Josefina sat on was not for sale
because it was the prototype.
Mom asked if she would make another for next month's
Spring Festival.
We looked at the other miniatures,
and admired this colcha embroidered bag
being worn by Josefina.
This was a one of kind piece also made by the manager.
The manager said she would sell it,
and Josefina said she would part with it.
They were glad to see it going to a good home. 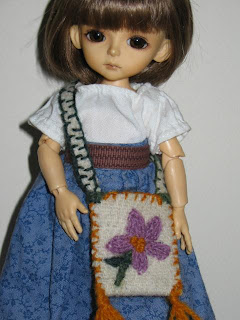 This special bag made the Josefina style clothes much more stylish!

Loved viewing your photos from the Rancho, and particularly loved finding out that it inspired the author of the AG Josefina series. Gracias mi amiga!